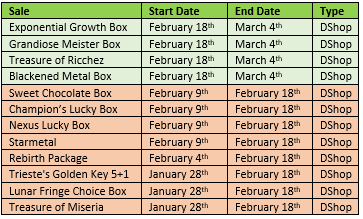 The experience bonus event has ended? That must mean that it’s time for experience scrolls to go on sale! The 1500% scrolls in the Exponential Growth Box are just like you remember, but the 300% scrolls are now tradable. The 500% scrolls are available for the first time in the DShop, and also tradable.

NOTE: You can only have a maximum of 5 experience scroll buffs running at the same time, so plan ahead if you still have any 200%’s, 1100%’s, and 1400%’s left over, and are looking to go extreme HAM on bonus experience. Unfortunately, you can only go regular HAM. 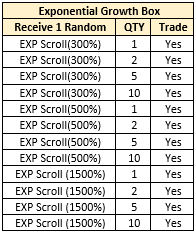 To make up for that terrible joke about scrolls not being available during EXP events, you can save on Grand Meister skills with the Grandiose Meister Box, now that the Meister event is in effect. The box and all the books it contains are binded, so you’ll be limited to treating yourself.

A quick refresher: both Treasures of Miseria and Ricchez are worth roughly the same, on average, but each one contains a “greater” or “lesser” version of a certain type of item. So you can drop some cash on either and expect similar returns, or focus on one for a specific prize. 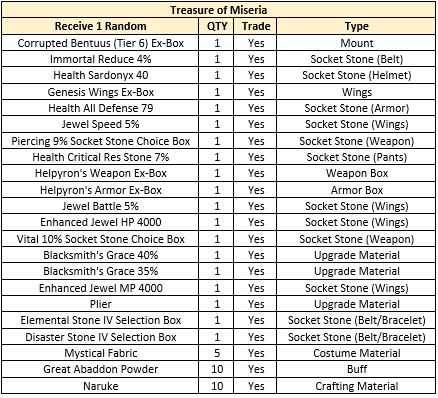 The biggest change to Trieste’s Platinum Treasure Box is the Cancel Abn Res 4% costume crest. With Abnormal Status Resist levels having gotten so high, it’s nice to have a chance of landing those debuffs, right? The Brand Option Lock is now tradable, too (this only applies to new ones, not existing ones you've already received).

Also, there are two blue costume crests. Because reasons.