Just another minor update this week, due to our planned Action 24 content needing some extra attention. Still, you can start the year off with a new round of Attendance Rewards, and the DShop’s costume crest boxes have received a long-overdue upgrade.

This month’s attendance rewards aren’t incredibly different from last month’s, but why mess with success? If you join us in Dekaron every day, we’ll happily spot you the New Type Premium Costume Ex-Box on day 24, giving one character on your account your choice of the following New Type costumes: Santa, Ninja, Hanbok, Medieval, Premium, Skull Mask, Wedding, School Uniform, Swim Suit, Pirate, Adventurer, Kindergarten Uniform, Witch, or Winter. A stylish start to 2021! 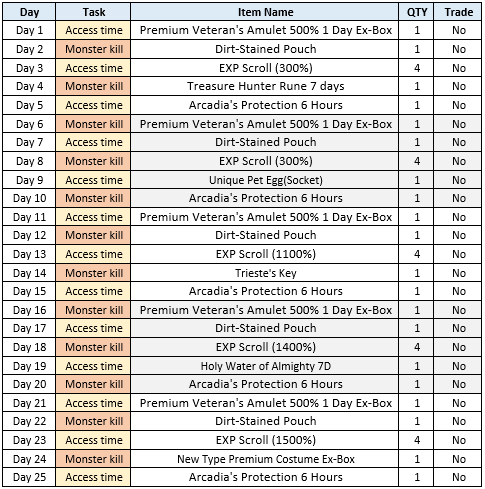 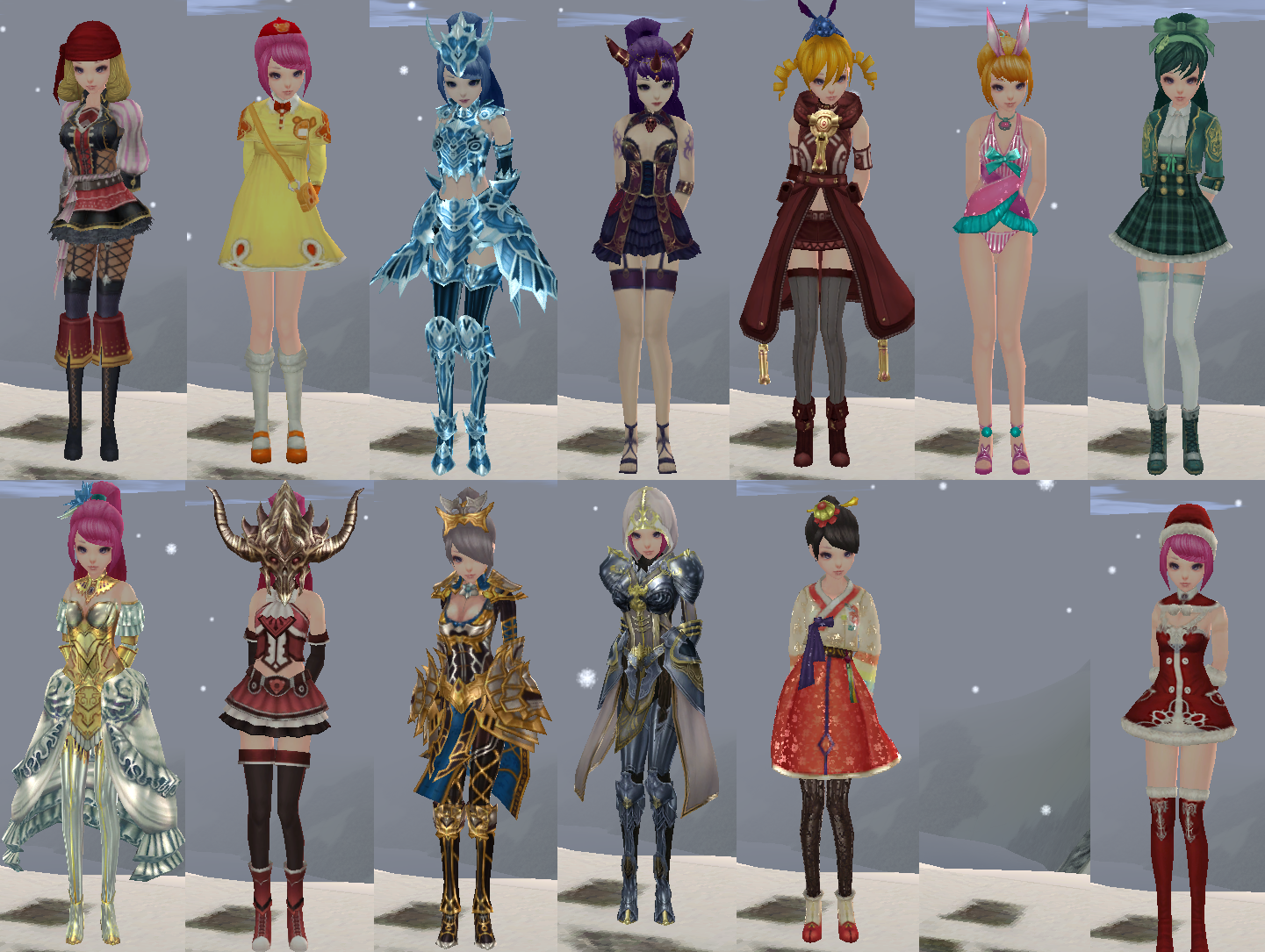 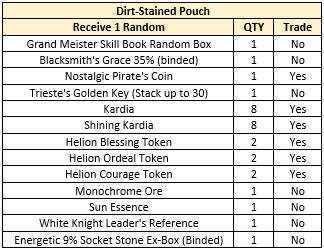 EXP scrolls are on sale again, and many of the crests in the random crest boxes have been boosted by a step or two.

As it turns out, the Hyper Glitter Box was indeed ridiculously overpriced. The item has been removed early, rather than having its price lowered, which would be a severe slap to anyone who happened to buy one.

In another case of not messing with what works, the Novus Annum Scroll Box is suspiciously similar to our last EXP scroll offer. In fact, it’s so similar, that existing scroll boxes might have changed their names. But it’s a completely new box. We didn’t change the name of the old one. We have always been at war with Deneb. 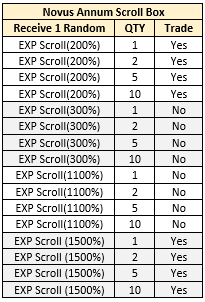 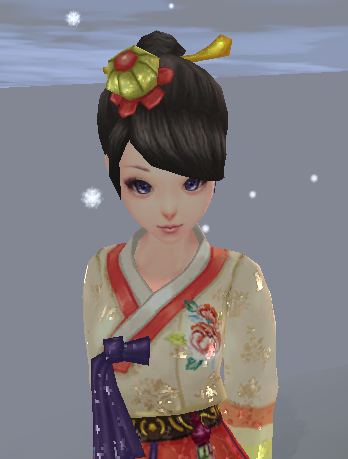 There is no war within the walls.

And at long last, the old costume crest boxes are getting an update. The price is going up slightly, but the new crests contained in each of the New Crest Random Boxes are streets ahead* of what’s been available until now, and well worth the slight price increase.

We ARE admitting that these are just upgraded and re-named versions of the Crest Random Box 4, available from Schrodinger’s Box and White Metal Rat Fortune Box. The contents are better than the existing 3’s, and a couple of crests have been added to the orange and purple boxes, most notably the long-sought Cancel Abn Res 4% purple crest. Any existing Crest 4 boxes will be renamed and have the new possible contents added.

*If you have to ask, you’re streets behind. 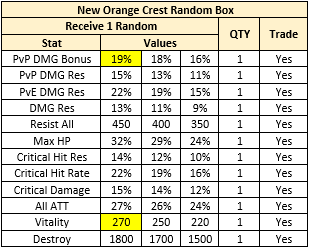 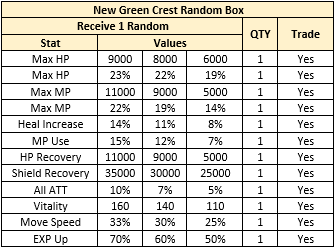 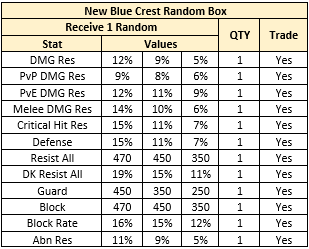 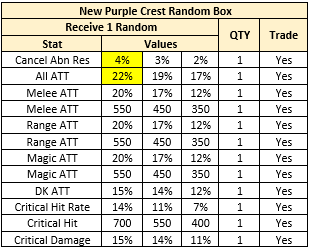 As long as we’re talking costume crests, the crests in Trieste’s Gold Treasure Box have been flipped around a bit. Viola’s Sewing Needle will now be a common prize, while the Guardian’s Wings will show up for a few lucky winners. 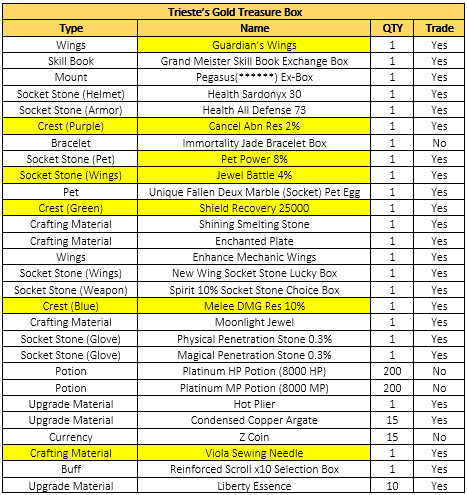 Half Bagi and Dragon Knights can now receive Good Health and Long Life Jade Bracelets from Dein in the Colosseum Lobby.

The Underground Skull event was added some years ago, along with the launch of Crespo’s Treasure (Hard), and was intended to be temporary, which is why it was not added back with the recent revamp of the dungeon. We added back a temporary and expanded version of this event, the Dungeon Delve, as compensation for the sudden, unannounced removal, but ultimately the event has to be temporary, in order to keep in-game rewards like the Dragonic Perpetuus available at controllable and predictable rates. As such, the Underground Skulls are no longer available and cannot be exchanged with Karin, and any existing skulls will be removed with the January 21st update. The event will likely return at some point in the future, but it's necessary to remove the remaining Underground Skulls for now in order to keep things even for when the event may return.

We’re sorry that this method of obtaining a prized item had to be removed so suddenly. While we are always taking measures to keep track of in-game events and prevent these sorts of incidents, there will still be occasional slip-ups left over from months or years past. We greatly appreciate your understanding.