We close out the year with our last and largest content update: Action 24 Part I: Elmar.

The call has gone out to the mightiest Dekaron, to render assistance in a newly-discovered region of the world. It will take some preparation to survive Elmar, but it’s the only place to discover Rondo’s Armor.

Act24: Part I also updates the drops in several outdoor maps to better help players push through the lower end of the power curve, and Aria has discovered a way to unlock a new level of power from within the Snowflake Emblem.

A vile pollution has fouled the shores Dravice Village, and tracing it to its source has uncovered Karon’s master plan to corrupt Elmar, the sea-floor home of the Incar deity Rondo. Karon surely won’t stop once he succeeds, so it’s up to you and your fellow Dekaron to disrupt his demonic designs. While doing so, you’ll explore a wondrous undersea realm, encounter unbelievable new creatures, and earn brand-new equipment which can reach greater heights of enhancement than ever.

Elmar is a DK map, so you won’t have the option of sticking to the non-PK channel. And you’ll need to be at least level 200 to enter, so be prepared to face danger from your fellow adventurers, as well as the local sea life!

A demonic pollution is choking the entire area, and you won’t survive long unprotected, succumbing to the Breath of Corruption effect. Thankfully, Blessing of Miere is not difficult to locate, and each use will protect you for 20 minutes. 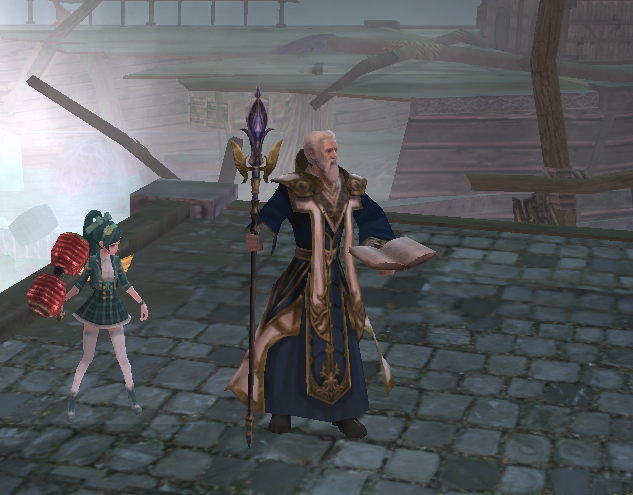 Be prepared for quick escapes, because your land mounts won’t work underwater.

Any creature in Elmar has a chance of dropping Rondo’s Locker, which will contain a random piece of Rondo’s Armor, a brand-new armor set, reserved for characters of level 200 or higher. You could end up with any piece, so putting a full set together for your class will probably require some trading. 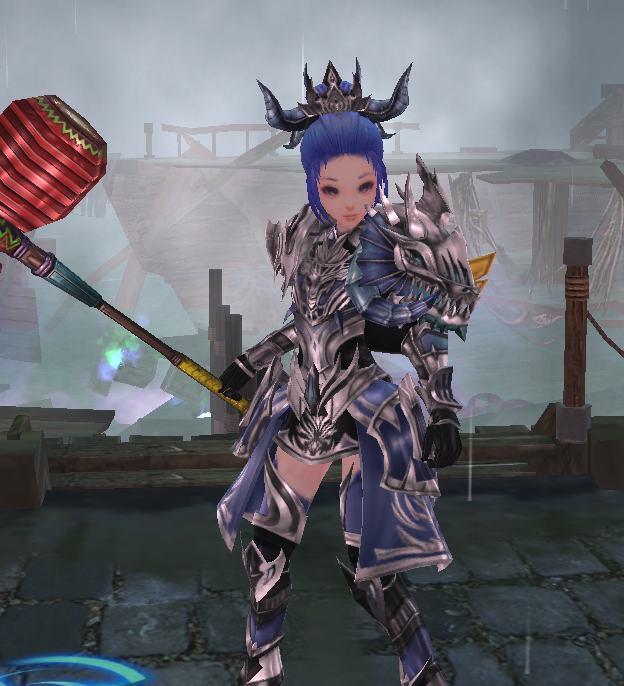 Blue hair may result from improper use.

When reinforced to +7 or higher, the set grants Rondo’s Breath, a set bonus which grants higher bonuses with more pieces equipped.

What’s most interesting is that Rondo’s Armor can be reinforced past +10 – all the way to +15. But be cautious! Not only does the +5% success from Holy Water not affect your chances of successful reinforcement past +10, but you can’t use Graces or any other protective items either. If you fail, that’s it. Be prepared to live dangerously. 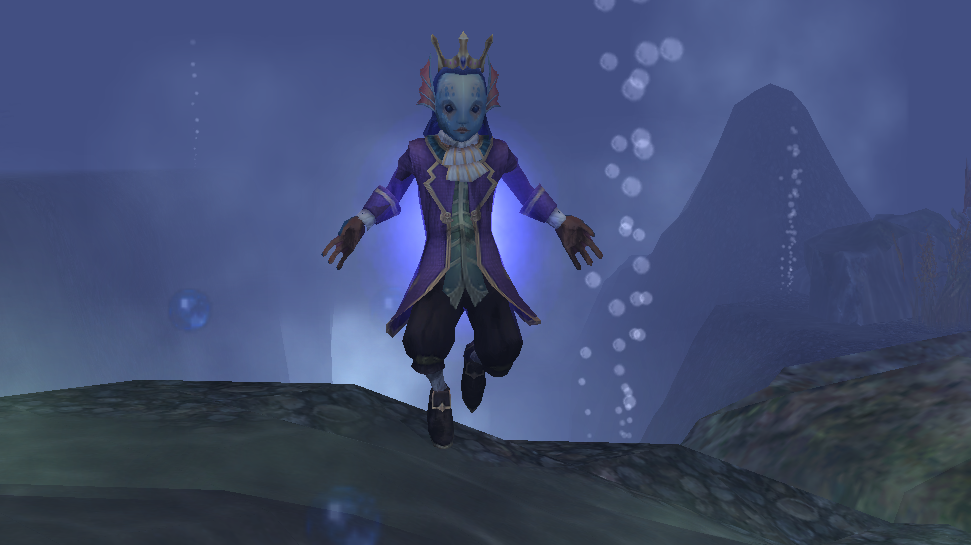 Soon you will curse his name.

If you can find enough Serene Sapphires, and have already been persistent enough to obtain your own Majestic Garnet Earring, you can see about upgrading it to the Majestic Sapphire Earring – the final word in PvE defensive baubles.

The whole map will be notified when a Lesser Nepturos or Lesser Leviathan appears, but precisely where it will have shown up is anyone’s guess. These giants offer better chances at loot, so the hunt will be on when the word gets out. The event more intense hunt will be for the Golden Turtles who swim in once the lesser giants are slain, because these blinged-out reptiles are the best source of wealth in the sea. But Golden Turtles only stick around for an hour, so get hunting.

Feel free to pat yourself on the back if you’ve held on to your Snowflakes despite fully upgrading your Snowflake Emblem. You can now bring your stage 4 emblem to Aria, and have the chance to upgrade it one more time. But while 70 Snowflakes isn’t a lot, there’s no guarantee that the upgrade will work (you’ll only lose the Snowflakes on a failure, not the emblem). 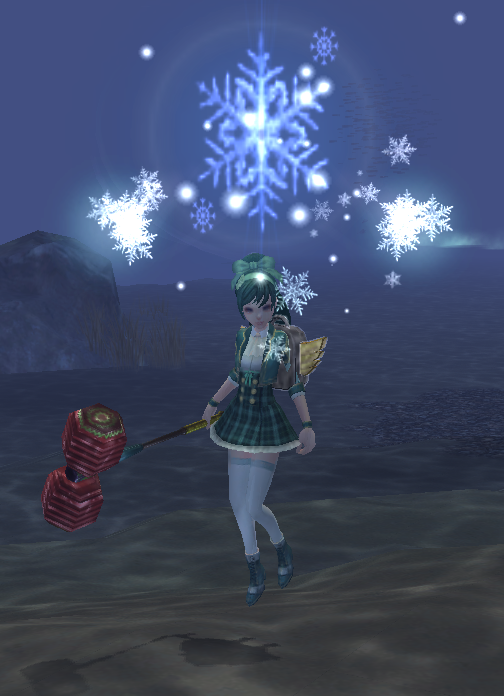 With this new content update, comes minor changes in item drops across some of the world’s outdoor maps. The appearance rates of normal Argate and Mavric have been lowered, to reflect the changing scope of how these items are used. Several low-grade socket stones have been removed from Deadlands, but they can now be found in Crespo Abyss.

Those players will also be interested in the new Faint Umbar Earrings, and the Faint Phantom and Dravician Rings, which have a chance of dropping from any monster in Deadlands, Phantom Land, or Dravice Field, respectively. All 3 are tradable, and you can see Aria for a chance at upgrading them, using common materials.

Only one type of Dravician Ring can be worn at a time.

Some good news for those of you who don’t want to step into the Grace economy just yet – the maximum amount of DIL for your inventory, stash, and personal shop has been increased by a factor of ten – to one hundred billion (100,000,000,000).

Meister Skill enhancement rolls around again, and with it comes the best time to save DIL on those Meister training sessions, and to get better returns with increased chances for successfully increasing skill levels.

The only thing better than a new map to explore, is a hefty bonus to experience while you’re doing it. The dial is set to 500% this week.

Trieste’s Keys rotate back in to the DShop, along with a couple of holiday-appropriate costumes. And if you weren’t hoarding those Snowflakes, but can’t wait for gather more, the DShop is here to bail you out.

The Perfect Gift is just too perfect to be limited to two weeks, so it has been extended for one more. 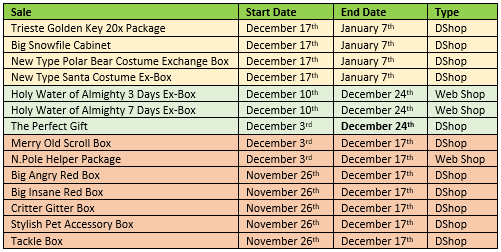 You can’t trade the Trieste Golden Key 20x Package, but the keys inside are tradable.

If you’re determined to get your hands on that new Snowflake Emblem, you’re going to need materials. The Big Snowfile Cabinet has got more Snowflakes than regular cabinet has rubber bands and old staples.

Two holiday-appropriate costumes have been added to the DShop – the New Type Polar Bear and New Type Santa Costume. Cozy! 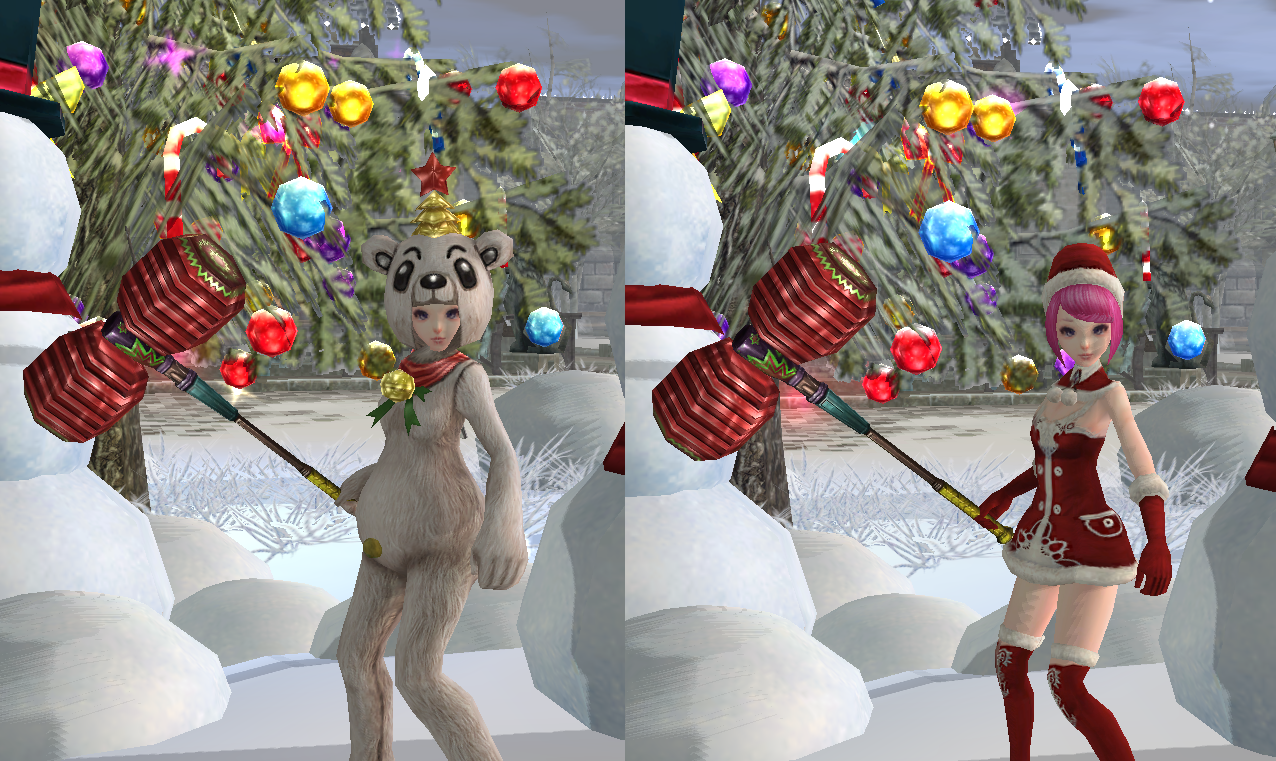 Is it just me, or does one of these look warmer than the other?

Two more in-demand costume crests have found their way into Trieste’s Platinum Box. Classes who use curse-, poison-, or dark-property attacks will no doubt have their eyes on the Disaster Stone IV Selection Box. The box now pays out more Blue Knight EXP Coins. 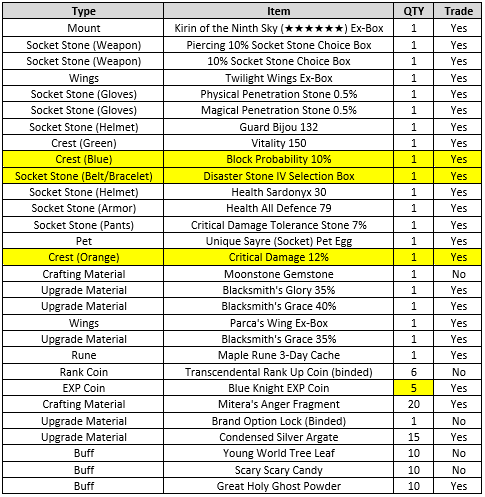 The UI issue which prevented entry to any of the Karon’s Fragments dungeons has been resolved.

The locations of Corrupted Phoenix Member can now be found on the map of Arcadia (Polluted).

The graphic option for monster dismemberment in Blood, Cutting was intentionally removed some time ago. The option has been renamed Blood to reduce confusion.