We're in the middle of preparing some big events and enhancements in time for the holidays, but this week we've still managed to refresh the Attendance Rewards, and bring you a few new sales.

Enterprising players might have noticed the suspicious lack of Underground Skulls coming from the revamped Crespo’s Treasure (Hard). While we won’t get into the reason for their absence right here, we recognize the magnitude of the loss, as they were a popular alternative method of obtaining the pieces of the Dragonic Perpetuus without completely negating the viability of the traditional method of getting it.

The bad news is that, unfortunately, we aren’t able to restore the skulls to the renewed dungeon. The good news is that, to make up for it, we’re (temporarily) adding the same reward not only to Crespo’s Treasure (Hard), but Siz Temple, Abandoned Qune’s Temple, Karon’s Fragments (Hard), and Undo’s Test (Party). You’ll receive a box with 1 to 5 Underground Skull I upon completing the dungeon.

For the uninformed, Underground Skull I can be combined with Underground Skull II (via Karin in Ardeca) to create Underground Skull III, which can in turn be given to Karin for a chance at one of the four pieces of the Dragonic Perpetuus. You can also receive a collection of 10 Abyss Crystals, which can be used to re-roll the random stats on the Sailor’s Ring of the Abyss you received from the Karon’s Transport Ship dungeons.

As you might suspect, this is now only a temporary event, and the Underground Skulls will no longer be given out once the event ends. All existing skulls will be deleted two weeks later, along with the exchange quests. We’re hoping to bring this event (or something similar) back periodically, though you’ll have to start fresh next time.

We don’t expect this new state of things to go over well with everybody, but it’s the only solution which allows us keeps the event available and working properly, for as much time as possible.

Our new Attendance Reward system has been well-received, and a new month of rewards has arrived for those determined players who log in daily. If you claim each reward as soon as it's available, you’ll have a New Type Rudolph Costume Ex-Box just in time for Christmas Day. 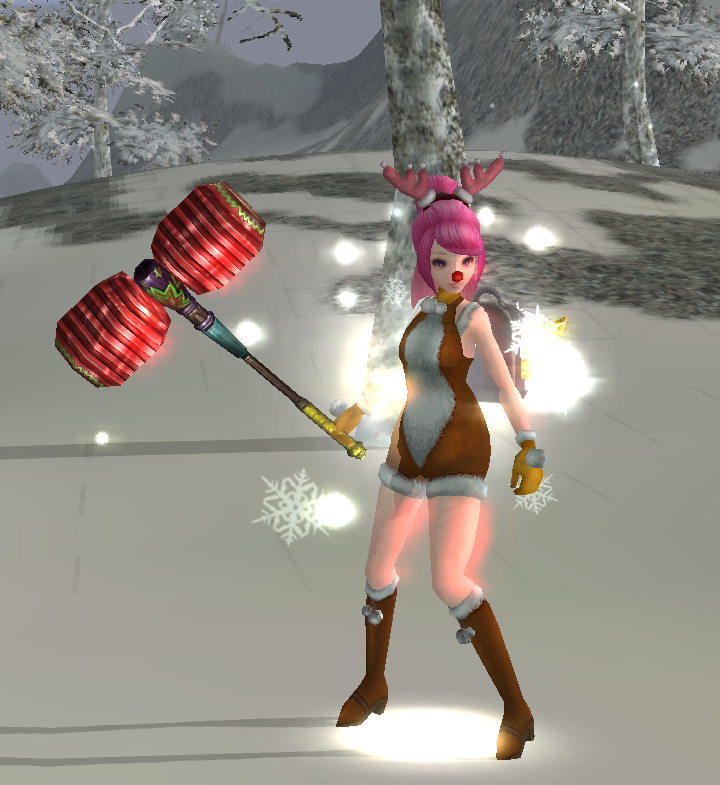 Oh good. Because my family certainly needs to see me like this.

The Attendance Reward system provides the indicated reward for each day that you log in and complete the indicated task (either remaining logged in for 30 minutes for Access time, or killing 100 creatures for Monster kill). You can claim one reward per day, and receiving a reward makes you eligible for the next day’s. You can only claim each reward once per account, but you can claim it on different characters each time, and you don’t have to claim a reward on the character who completed the task. 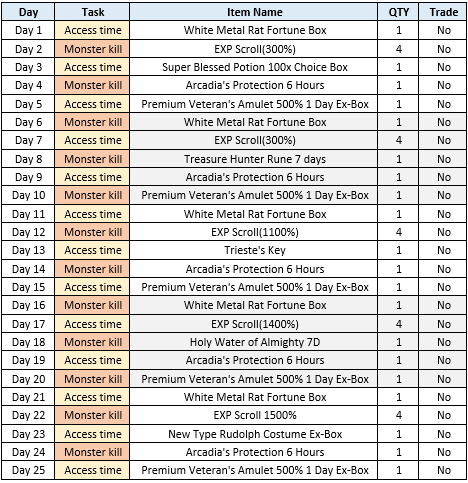 We’re nearing the end of the year of the White Metal Rat, so the White Metal Rat Fortune Box is making a final encore appearance. Existing boxes from this and past events, and the contained rewards, will be removed in January 14th’s update. Make sure to unbox those runes & costumes and consume those buffs, because they’ll be gone for real this time. (This doesn’t apply to the boxed items once they’ve been opened. The Moonlight Wings Exchange Box won’t be removed.) 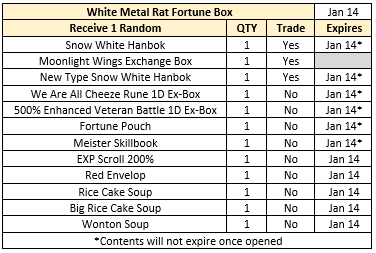 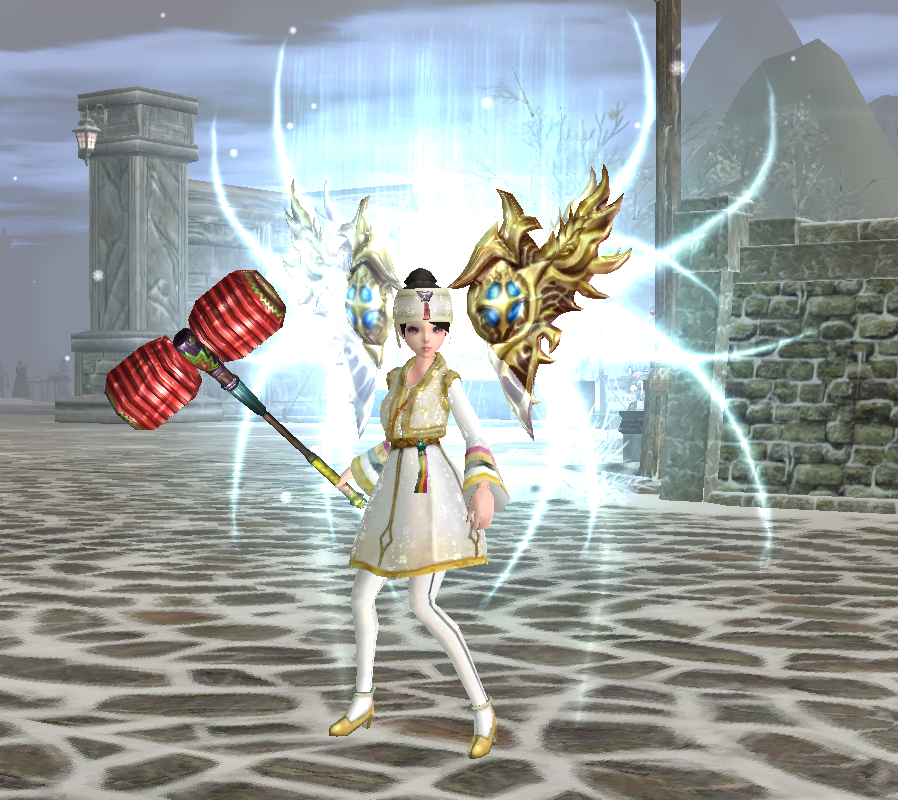 The outfit is white and the wings are metal. Who's the rat?

We’ve fallen a bit behind while preparing for a major update, so you will be able to help Viola hunt Spiderbees for one more week, until December 10th (but you can't get a Honeysilk Filter if you've not received one already). All items specific to the event will be removed on December 17th.

We managed to make it through this Black Friday with fewer stampedes and smashed windows than ever. But we can’t help but tempt fate, can we? A new EXP scroll box rotates into the DShop. And if you’re feeling saucy, you can nab multiple holiday-themed cosmetic items in one go. A new package deal has blown into the Web Shop, too.

Maximize your limited hours of merrymaking with the Merry Old Scroll Box. It’s the same experience scroll box you know and love, but tweaked to be just a little bit more generous. You’ll be even merrier when you save cash with the 10-pack. 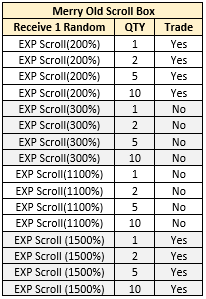 If you’re planning to treat yourself this holiday season, why not go all out? The Perfect Gift might lighten your sack a bit, but it’s the best way to get the full Christmas experience for the entire season. And you deserve the best, don’t you?

Rudolph’s Sled grants the usual T6 310% movement speed bonus, and lifts your PvE Damage Resistance to the 75% cap while you’re mounted. And just having it in your mount slot grants you +100 to your main stats, 5% PvE DMG Res, and a 60% EXP bonus.

The Unique Karon’s Nightmare pet, in addition to the standard pet options and automatic socket, gives the gift of 7% to all ATT and 7% PvE DMG Res.

The XMAS Angel/Devil Wings don’t quite compare to newer flight gear on their own, but either pair looks stunning, and they grant a set bonus when worn with the New Type Cozy Santa Costume. 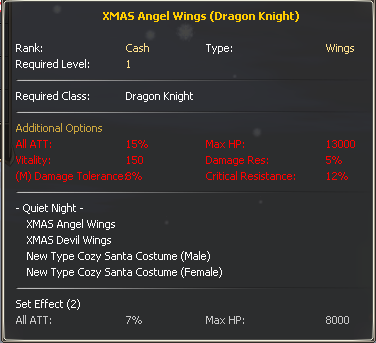 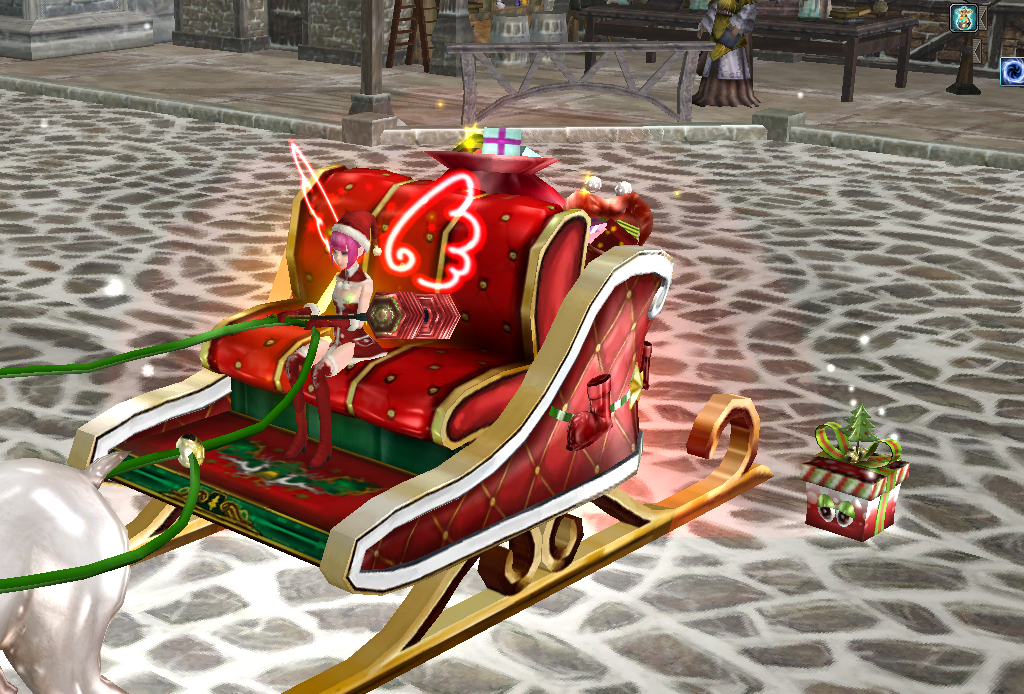 You say you love Christmas. But do you LOVE Christmas?

Our Web Shop is featuring the N.Pole Helper Package, a bargain box that let you ignore daily limits and keep playing as long as you want. Grind away at those dungeons all night and day, with enough entry tickets to keep you going for the entire 7 day duration of the included 700% Veteran Battle talisman.

(To clear up any confusion that might result over the displayed names of the Camouflage x10 and Premium Infinity Battle 2 Ticket x10, the package contains the total number of individual items displayed on the table below, not 10 or 20 packages of 10.)

Casters can rejoice as Trieste’s Gold Treasure Box swaps out the ever-popular Dex 10% stone box for the equally-useful Spirit 10% Socket Stone Choice Box. PvP DMG Res 10% is a little orange wonder that will keep you in the fight, and the Grand Meister Skill Book Exchange Box gives you the choice of any Grand Meister Skill from any class. 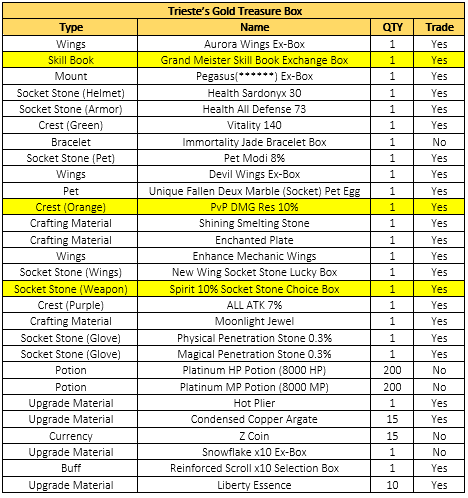 Last week’s patch notes stated that Treasure Hunter Rune 7 Day Ex-Box would be mailed to players who missed out on the entire duration due to a bug, but many players were missed. We’ve made sure that everyone receives their rune this week.

Certain versions of Trieste Water and Abaddon Powder were causing crashes when used from potion hotkeys. This issue has been resolved.