A couple of months ago, a slew of adjustments were added to pare down overpowered classes and skills, and bump up some underachievers. This week we’re adding a few more tweaks to cover some classes & skills that are still under/over-performing.

In addition, there are giant insects swarming all over, and Viola has just the thing for anyone interested in hunting them. Accessory Enhancement is back, and a brand-new item is featured in the DShop.

Between the rising gear/power curve and changing meta-strategies, class balance remains an ongoing task. This series of balance changes has buffed a good number of skills across several classes, with only a couple of skills needing to be struck down with the Nerf Bat™.

Most damage skills listed here have been buffed in a similar manner – a 10% increase to damage, with an additional 5% increase in MP cost. Our notes will cover skills which received other sorts of changes.

All indicated values are for the skill’s maximum level.

The Aloken signature defensive cooldown, La Defense, needed to have its melee damage reduction slightly reduced past level 5. To compensate, its MP cost has been reduced.

Black Wizards will suffer additional health drain while under the effects of Devil’s Power, but will be able to bypass some magic damage reduction while it’s active.

Segita Hunters will inflict additional hits for the area damage portions of Conciant and Duporne. Terrace Magic’s Cool Time has increased slightly, but the hunter can now penetrate some physical damage reduction while under its effects.

Dragon Knights will find that Critical Rise’s Cool Time has tripled, but the duration of the buff has increased (nearly) as much. The recipient of the buff will have a chance to cancel their target's abnormal status resistance.

Bagi Warriors who direct damage upon allies to themselves via Divide Pain and Divide Force will only suffer 25% of the overall redirected damage, down from 50%.

To clarify, Divide Pain/Divide Force redirect 40%/25% of damage taken by one ally/all allies, and that damage was previously reduced by 50% before being dealt to the Bagi. Now it is reduced to 25%, so the Bagi takes even less damage when protecting allies with these skills.

Half Bagis were swinging a little too wide with Power Spin, so its range has been cut down a bit.

Despite Blow of Fury emitting eight visual pulses, you’ve probably noticed that it only inflicts six hits upon nearby targets. The hits have been boosted to eight, so the damage pulses now match the skill’s visual effect.

While you're out beating each other up with your modified skills, you will probably notice the swarms of Spiderbees now infesting the world, popping up at random from dead monsters on every map. 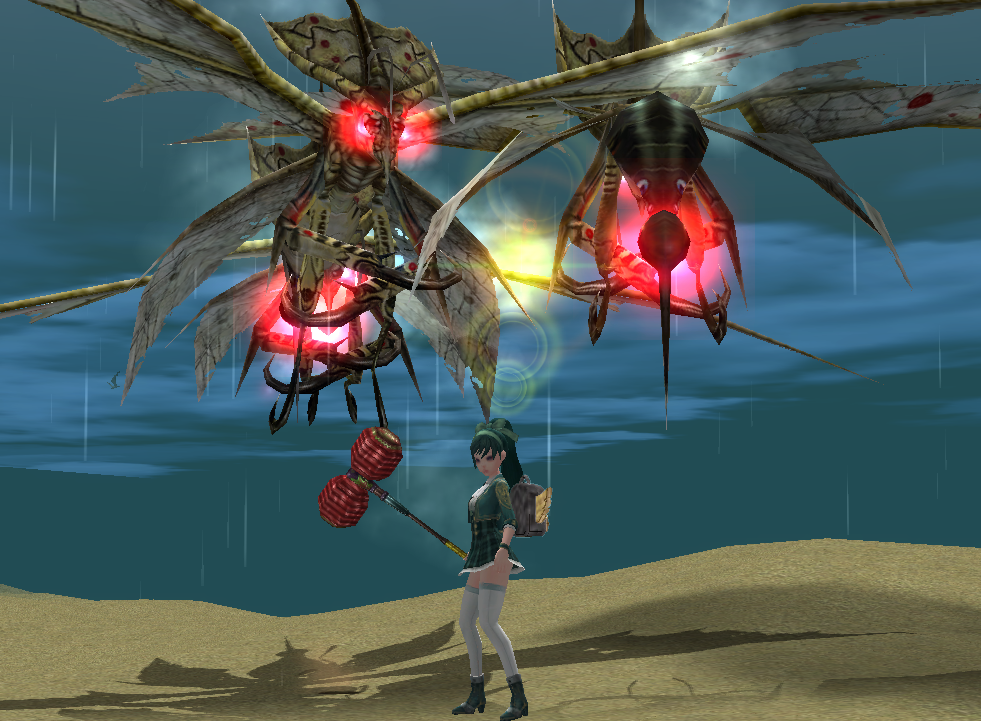 Whether they have come in search of warmth, food, or employment, they are most certainly a menace - stinging viciously when alive and oozing forth a mass of sticky Honeysilk when killed.

Thankfully, Viola has your back. 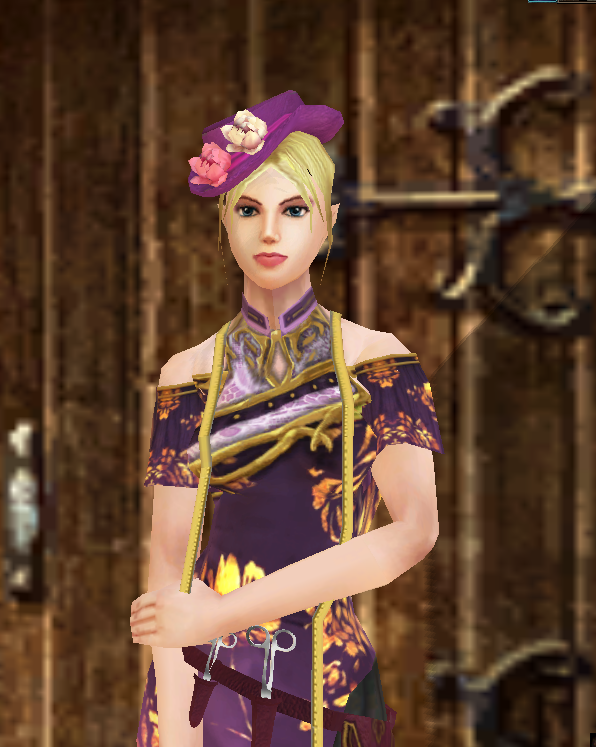 Might as well lend you a hand, as long as she's consuming your Mystical Fabric like popcorn.

She’ll provide anyone who asks with a Honeysilk Filter, a curious invention which is almost, but not quite, entirely unlike a Phleebus.

Any resemblance is unintentional.

When you're carrying the Honeysilk Filter in your inventory, a portion of Honeysilk from every Spiderbee you kill will go towards filling it. After 10 kills, the filter will be full, and you can press the Reward button to claim your prize, at the centre of a Honeysilk Clump. The filter can be re-used for the entire duration of the event, too. 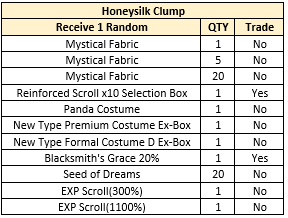 Needless to say, the Honeysilk Filter is a rare, one-of-a-kind masterpiece of Viola's tailoring craft, and can't be replaced if lost.

Aria is back at it again, with big material cost reductions and increased success chances for some coveted accessories, earrings, and emblems.

Failed again? Someone is going to hear about THIS!

Highlighted numbers on the tables indicate reduced material costs. Highlighted arrows indicate increased chances for upgrade success, and 100% means that the upgrade to that stage is guaranteed to succeed during the event. 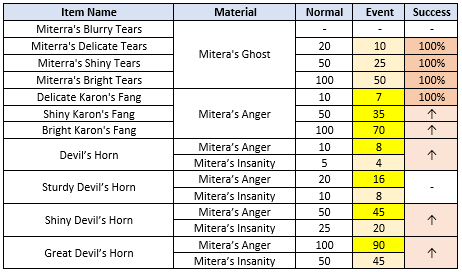 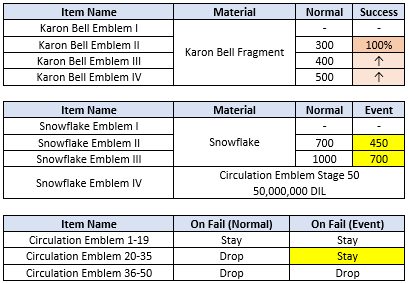 Keys go on sale once again, and a new way to stock up on essential buffs is now on shelves.

As befitting its name, the Retro Buffer Box is packed with basic buff items, and priced to move at only 55 DKC per unit, with the usual bulk discount for 10-packs. Even the most common buffs add up to 3 hours of enhancement. And if you can stack up enough of them, you’ll be untouchable. 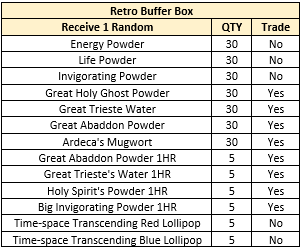 Trieste’s Platinum Box has had some minor changes to coincide with the key sale. The Piercing 10% Socket Stone Choice Box is here to help you deal with that pesky Cancel Abnormal Status stat, and Moonstone Gemstones have migrated over from the Gold box. 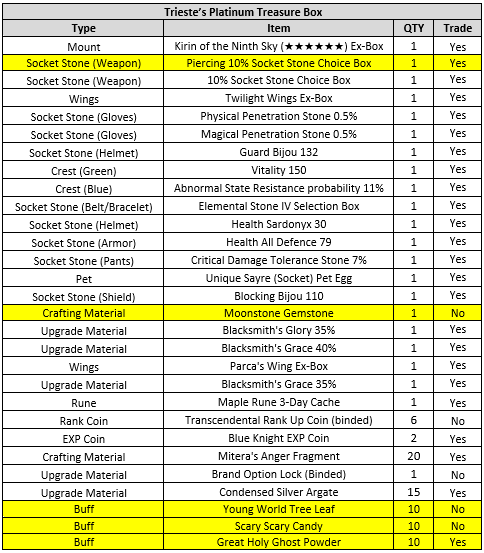 DK Square is actually giving double points. For real this time. The event has been extended by a week to compensate.

Players who had already exchanged Seed of Dreams for Master’s Mistake from Jack before last week’s fix should now be able to make the exchange.

Personal shops can no longer be opened inside Crespo’s Treasure (Hard).

The visual effect for Gold Dragon Gauntlets now actually appears on the weapon, instead of the floor.