Perpetuus seekers will be pleased with the opening of Sacred Claw’s solo mode, which streamlines progression through the dungeon, and makes Perpetuus materials more easily available. New Attendance Rewards will let you claim increasingly valuable rewards each day you log in. And experience scrolls return to the DShop, along with a new 7-day rune package.

On the far side of Dravice Field lies the stronghold of Sacred Claw, where fanatical followers of Karon experiment with magical tree sap, in order to bolster their already mighty forces. The defenders of Trieste continue to face it, primarily to seek out the components of the Dragonic Ungula and Dragonic Kornu, which in turn compose parts of the Infinite Dragonic Perpetuus. And while this accessory is worth the time and effort necessary to craft it, it’s still quite a major undertaking.

Keep telling yourself that it's worth the trouble.

With the addition of the new solo difficulty, you can now challenge Sacred Claw without a party. As with most solo dungeons, you’ll need an Admission Ticket in order to enter, which can be purchased at the dungeon’s entrance. The first ticket you purchase per day will cost 250,000 DIL, and you can purchase up to two additional tickets each day, for 2 Super Passes each. You’ll need to be at least level 175 to enter, just like in (party) difficulty.

Sacred Claw (Solo) is aimed at Perpetuus hunters, so the only drops you’ll receive (in addition to Perpetuus materials and the standard field random drops) will be the occasional Disassembly Hammer or Transcendent Light. But the Corrupt Essence, Sal Crystalline, and Dragon Claw will all drop from their respective bosses at the same rate you’re used to. In addition, you’re guaranteed at least one Dragon Tongue from the first boss, and the final encounter, Binaelle Fairie, has a chance of dropping both the Dragon Claw and the Dragon Horn (the optional fight with Inner Ugliness is not included in the solo dungeon).

All inhabitants of Sacred Claw have had their offence and defense reduced by about one third for solo mode. You won’t have to bother with the valve puzzle, either. Your time will be further cut down by taking an unpredictable ride on the facility’s tram cars. You can’t control where you’ll end up, so you’ll have a 50% chance of facing either Conjuror Edward or Lab Chief Verdia, depending on which tracks you end up on. In the long run, this will work out to the same numbers of Corrupt Essence and Sal Crystalline by the time you collect enough ingredients for the rest of the Perpetuus. But if you prefer, you can use an additional Super Pass to select which boss’s area you’ll be sent to when boarding the tram, instead of leaving it to chance. 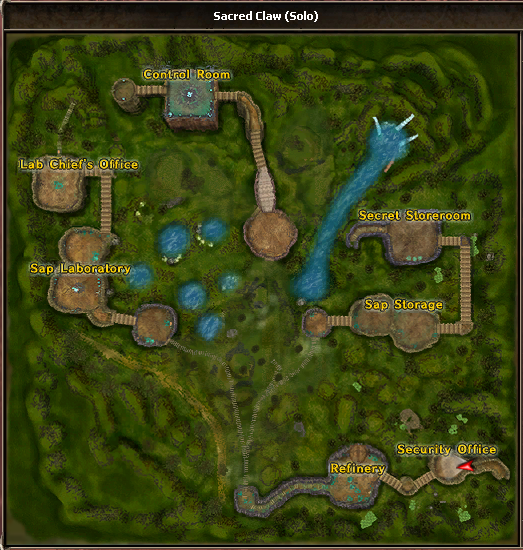 As an additional feature, players who challenge the original Sacred Claw (Party) difficulty will find that the drop rates for Corrupt Essence, Sal Crystalline, and Dragon Horn have all been permanently increased to 150% of their previous drop rate. This increase only applies to (party) difficulty.

We may still be stuck inside, but we can’t help but feel the doldrums encroach upon us as we face the reality that Summer is truly over and Winter is now approaching (unless you’re in the Southern Hemisphere, in which case, sorry about being stuck inside for Summer).

Wherever you are, we have just the solution for the blahs: free stuff!

The Connection Reward system has been revamped, and is now known as Attendance Rewards. 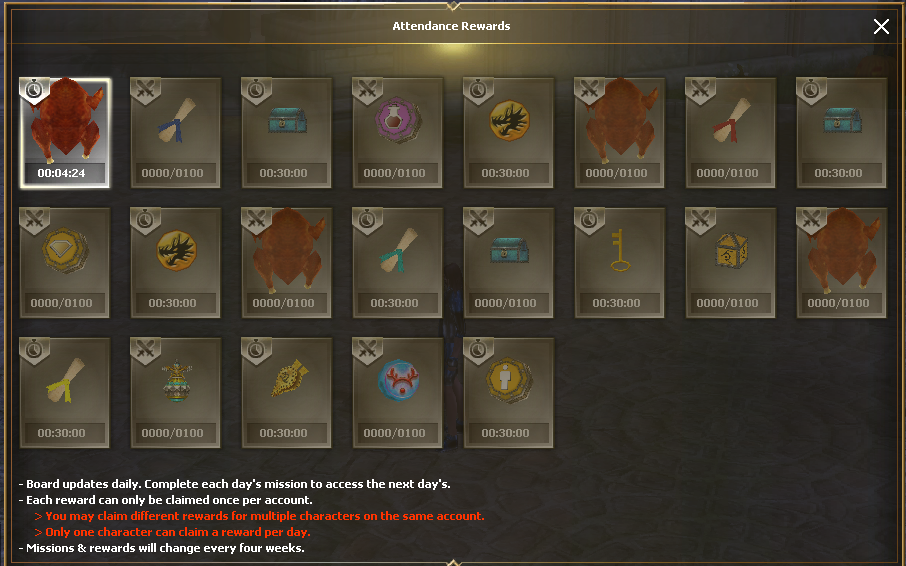 We’ve run progressive daily giveaways of this sort before, but this time we're introducing a new interface where you can track your progress and see what’s waiting for you each day. The rewards will now be delivered directly to your character, rather than being sent via mail. Although this new daily attendance system is similar to Connection Rewards, you can only claim each reward once per account, and you’ll always start on Day 1 for each new reward cycle. You’ll have to have claimed the previous day’s prize before being eligible for the next, so you’ll need to log in on 21 separate days by the end of the 4-week event to claim the entire list. We’ve left enough spare days that you can miss several, and still be eligible for the top prizes.

You will also need to do slightly more than just logging in. Under the Task column, days marked Time require you to have logged in for at least 30 minutes before you can claim that day’s prize, and Hunting requires you to kill at least 100 monsters, within your character’s level range.

While you’re limited to claiming each given reward once per account, you can claim them with any of your characters. And every four weeks, we’ll be introducing a new set of rewards. 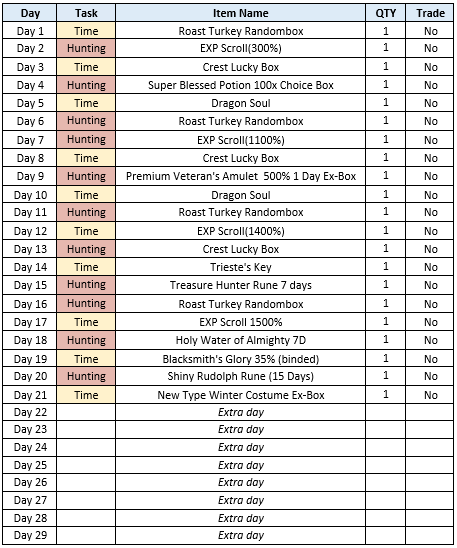 The Roast Turkey Randombox is extremely silly and most of the rewards are obsolete. But it’s shaped like a turkey, so we couldn’t turn it down. 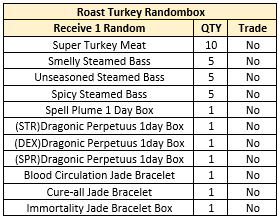 The Crest Lucky Box was one of the possible prizes from the Phleebus event a few months back. You won’t be able to trade the contents, but it gives you a reasonable chance at some otherwise rare crests.

You’ll likely be feeling the holiday spirit already by the end of the third week, so the Shiny Rudolph Rune will be ready to fill you with holiday cheer, granting a chance on kills to be buffed with 20% each of All Attack, All Defense, Max HP, Max MP, Movement Speed, and Critical Rate, as well as +200 Vitality and +100 to All Stats. Be thankful that we had the decency to wait three weeks before going into Christmas mode, unlike the shopping mall.

One of our recent events featured the Halloween Spookulet , a humble but respectable accessory. Unfortunately, while five tiers were included with the event, we neglected to include the sixth, for reasons. And considering the nice bonuses to experience and item drop rates it provides, we can understand why players want it. 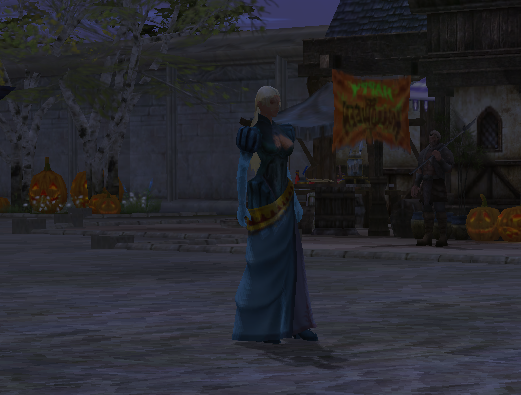 Still not my fault.

Rather than collecting candies this, Karin will happily upgrade your Tier 5 Spookulet to its final stage, in exchange for a minor task. All you need to do is join a battle for Ice Castle, and defeat Karke. Any difficulty will suffice, and only one victory is needed. 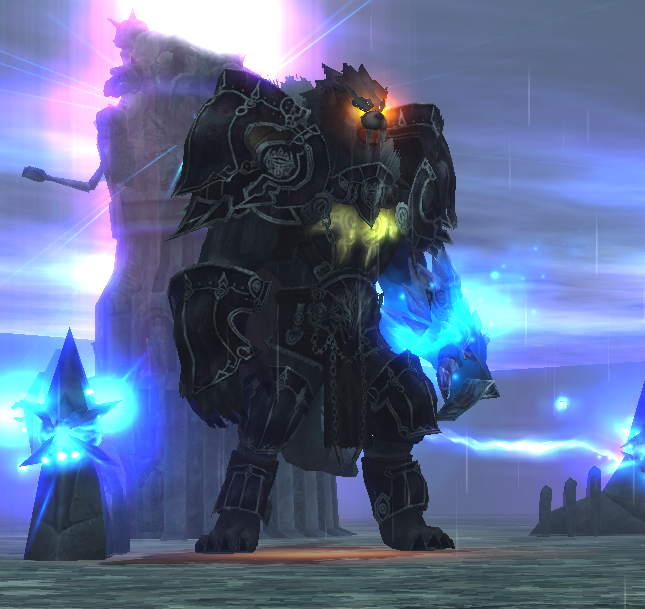 You’ll still need to already have the Tier 5 Spookulet for it to be upgraded, but you’ll be sitting pretty once you’ve finished with this simple task. And then you can stop asking about it, because Karin really wants to put this entire incident behind her.

NOTE: You must possess the Halloween Spookulet (Tier 5) UNEQUIPPED and in your INVENTORY for this quest to appear!

Experience scrolls are back in the DShop by popular demand. And our rune stash lets you get the jump on Winter, as well as your opponents.

Another “scroll” pun means a new experience scroll box is up for sale. They See Me Scrolling lets you add another +1100% multiplier onto your stack of scroll bonuses, and skews the chances of higher experience multipliers towards the higher end. And when you purchase in lots of ten, you’ll get an effective 20% discount. Nothing dirty about that. 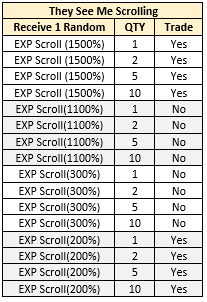 Seven is your lucky number, with the Winter Weekly Rune Stash offering seven potent runes, each lasting for seven days. Trigger enough of these and you’ll be unstoppable! Some of these runes haven’t been available for some time, so we’re including the stat bonuses from the buffs granted by each. The Reinforced Incar Rune doesn’t grant a buff, but instead offers a significant chunk of bonus experience when it goes off. Goes great with the 7 day 700% Veteran’s Talisman!

Fallen Deux Marble returns to Trieste’s Gold Treasure Box after an extended absence. Adopt this most adorable member of the Incar pantheon, and be rewarded with 5% increased damage and damage reduction in PvP. Pet Modi 8% is just one of the many stones you can give your new pet. We’ve rounded out the gold box for this month with the addition of valuable blue and purple costume crests. 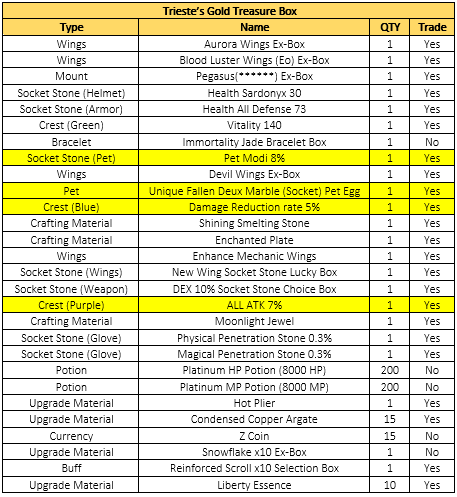 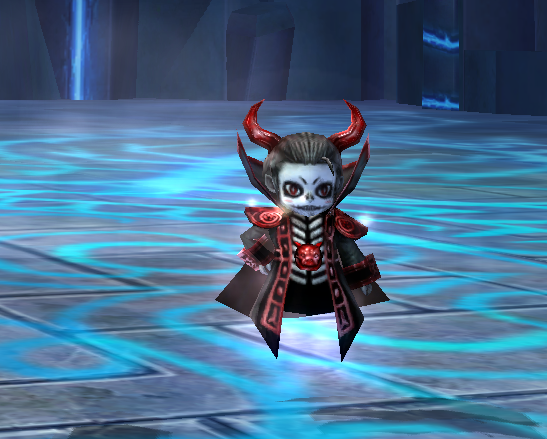 Unique pets will now display their unique options on the tooltip for the pet and egg items, in addition to their rank options.