Things have gotten a little spookier in Ardeca, with a strange pumpkin popping up in the middle of town, and Karin taking it upon herself to see it get fed. Meister skills will be easier to train for a limited time, and the new Zuto weapons are now available in exchange for Z Coins.

You might have noticed the giant pumpkin in Ardeca. We don’t know where it came from. Frankly, we're not sure we want to know. 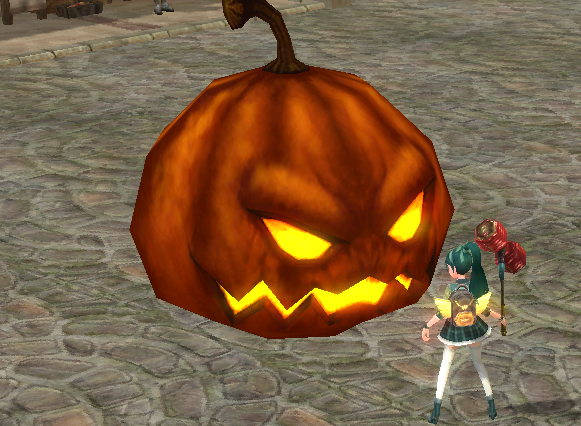 But Karin seems to have taken an interest, and is asking for help to keep it fed. However, this is a very fussy pumpkin, who will only eat the Halloween Candy that you’ll find dropping from monsters in the world during this event. 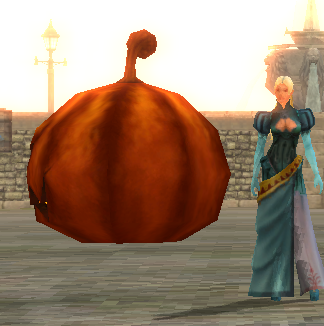 Really? My WHOLE family? Okay, whatever you say, Talking Pumpkin.

What’s going to happen when we start tossing random candy into random pumpkins? Some pretty cool prizes, is what!

The Halloween Spookulet is a respectable little accessory (requires level 100), once it's been upgraded to tier five. Rumours of a sixth tier remain unsubstantiated.

(Also, we didn’t see that there was a sixth tier until too late. Hang on to the fifth for now, and we will add the sixth upgrade option in a future event.)

The Halloween Special Package consists of some basic buffs, and comes with some holiday-appropriate accessories. 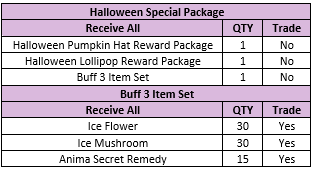 The Halloween Special Package lets you select one of three rewards, including the Pumpkin Ghost rare pet, which has a small chance of upgrading to unique. The box is not tradable, but both pet eggs are. 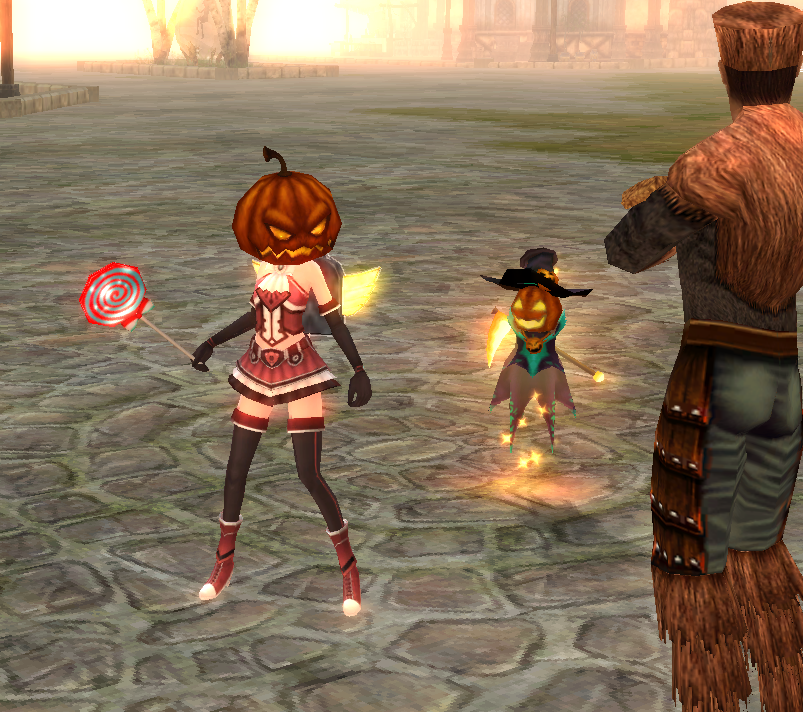 All your candy in the bag, or we TP the entire yard.

Minor changes to Connection Rewards this month, featuring the beefy Pumpkin Big Candy buff, and one hour of auto-fishing. 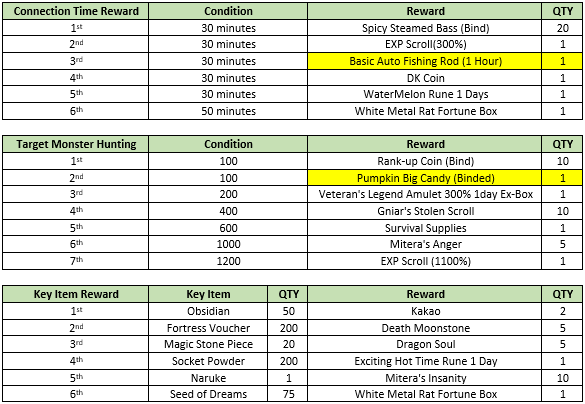 The savings are almost as big as my sword!

The experience bonus for both servers has escalated to 600% (700% on PK channel), for the entire week.

If couldn’t be bothered to get out of bed once the new Zuto weapons were no longer available, now's the time for you to awaken. Cash in those Z Coins with Brand in Ardeca to receive your own Awaken Zuto Weapon Ex-Box, with your choice of weapon inside.

450 Z Coins is a step up from the previous Zuto model, but you can use either binded or tradable Z Coins from any source, or a mix of the two. 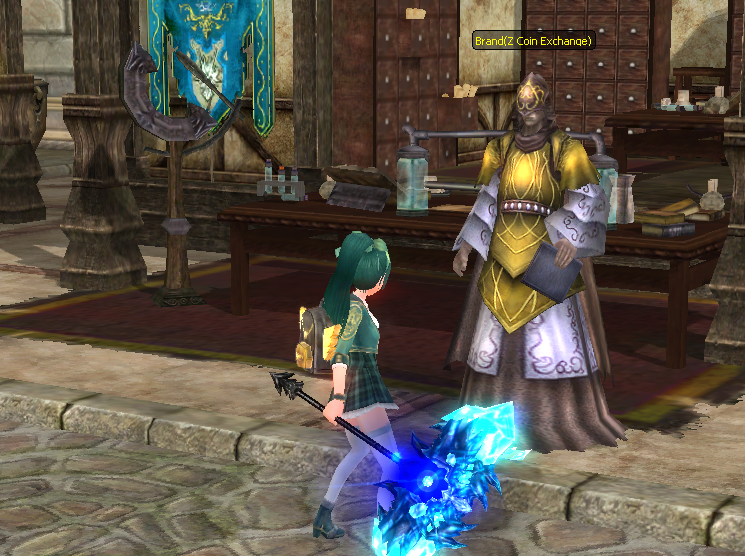 The item itself is cheap, because the add-ons are where the real profit is.

This week’s key sale offers 10 keys for the usual price, with something extra thrown in. And save on some choice items in our bundle offer.

When you smash open the Awakened Pumpkin, you’ll receive an Awakened Zuto Weapon Ex-Box which contains your choice of the new PvP-focused Zuto weapons, ten Pumpkin Rune Lucky Boxes, and – just in time for the holiday – a New Type Witch Costume Exchange Box. And all at a significant discount from what you’d normally pay.

The Halloween Candy is a bonus, but unfortunately it can’t be used for this week’s event. 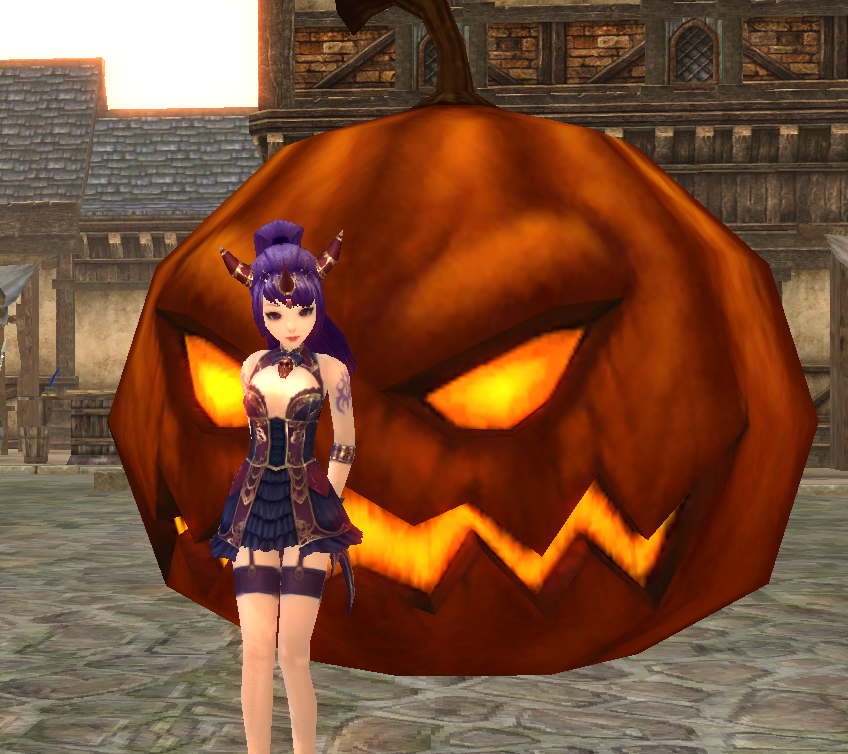 It's right behind me, isn't it?

The Trieste Key 10 + Treat box contains 10 keys at the usual price (unstacked because someone forgot to include a key ring). The Trick Key or Treat Box that’s included has an equal chance of providing either an extra key, or a Trieste’s Platinum Treasure Box.

And the Trieste’s Platinum Treasure Box has been changed up a bit again, with the Genesis Wings palette-swapped to Twilight Wings Ex-Box (but with the same stats), a couple of upgraded socket stones, some Halloween-themed buff items, and the new Maple Rune 3 Day. The rune’s stat bonuses lean more towards PvE, but it’s another addition to your rune set, regardless of the content you’re running. 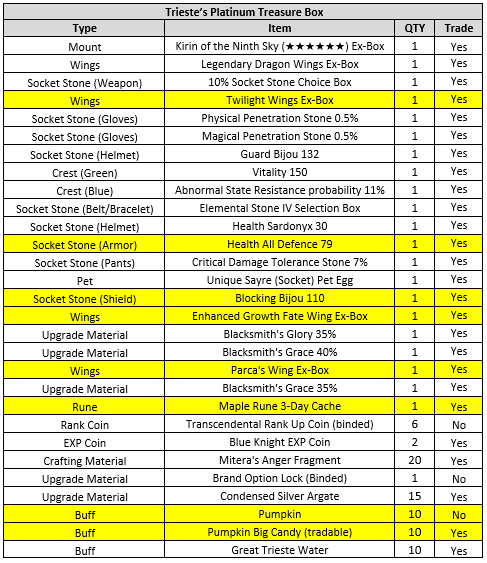 -         LOD (Level of Detail) has been removed in Graphics Options, since it is now locked to maximum and cannot be changed.

-         The New Type Dark Knight Costume Exchange Box did not contain an actual New Type costume. Players who purchased the original under the box's misnamed title have been credited the New Type, but we have decided to remove the item from the DShop, since it cannot be dismantled into Mystical Fabric.