It’s our most fabulous update yet. Viola, the most famous designer in Trieste, has set up shop in Ardeca, and is ready to assist any fashion-conscious Dekaron who’s ready to tailor their own custom-fit Transcendence Costume. Wingo is offering a new attendance event, and a wide new selection of costumes are now available in the DShop.

Until now, dressing for success in Dekaron has been a battle between fashion and function – it’s no use having the flashiest costume in town, if your OP crests are already in another outfit. You could extract them, but those pliers add up after a while, especially if you want to change your look regularly. Isn’t there a better way? 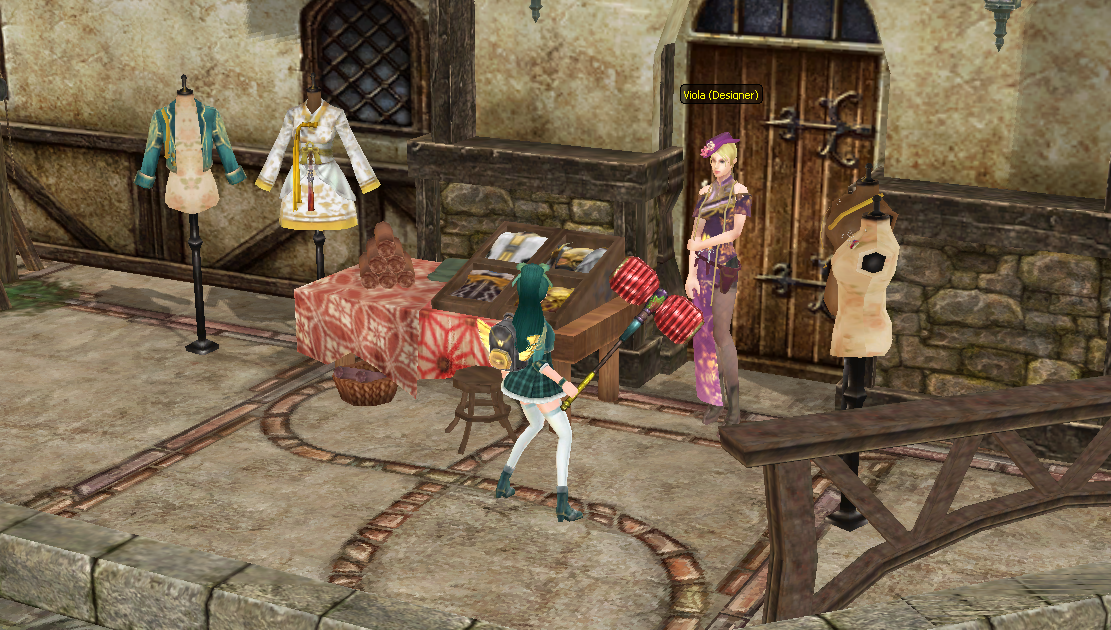 Ardeca’s brand-new fashionista can help you take those old, worn-out costumes, and dismantle them into a new Binded resource called Mystical Fabric (remember to extract any crests first!). This fabric can be used to create and modify the new Transcendence Costume, a wondrous new creation with stats and style that are endlessly modifiable. 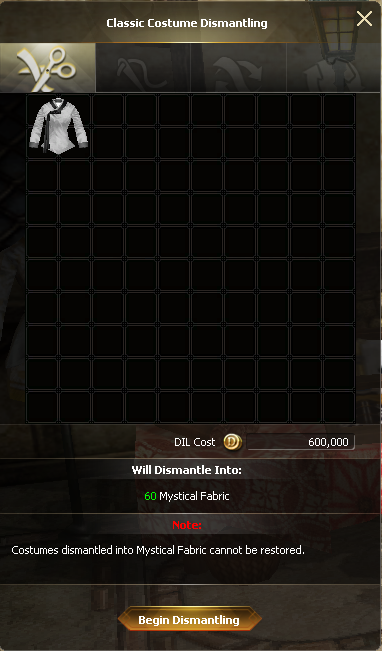 Viola is ready to lend a hand, but you’ll still need to do the actual work of sewing your Transcendence Costume by yourself. Each attempt costs 100 Mystical Fabric, and your success chance isn’t very high, so you might need to spend a good amount of time gathering materials and working the spinning wheel before the big payoff. 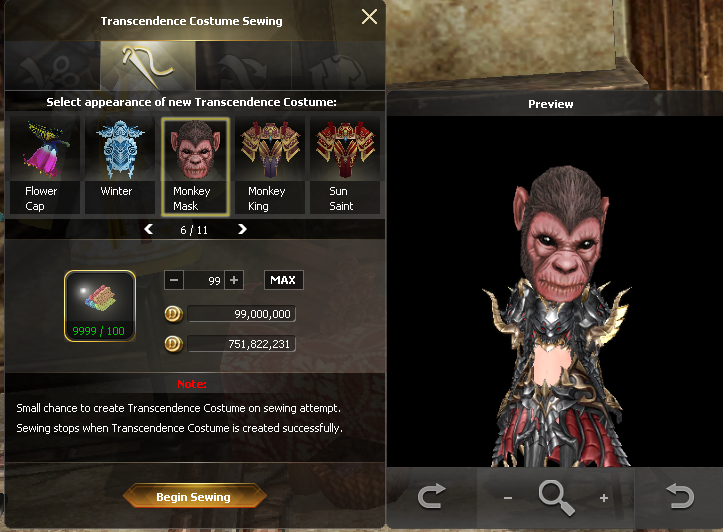 ...and make way for NEW crimes against fashion.

But once you’ve succeeded at sewing your Transcendence Costume, you’ll have a New Type costume, ready to have crests added to it just like any other. And if you get tired of the appearance of your new getup, it only costs a small additional fee in Mystical Fabric and DIL to change its look into just about any other costume appearance that’s available for your class. Viola has even dug up some retro fashions, from costumes that haven’t been available for a long time. 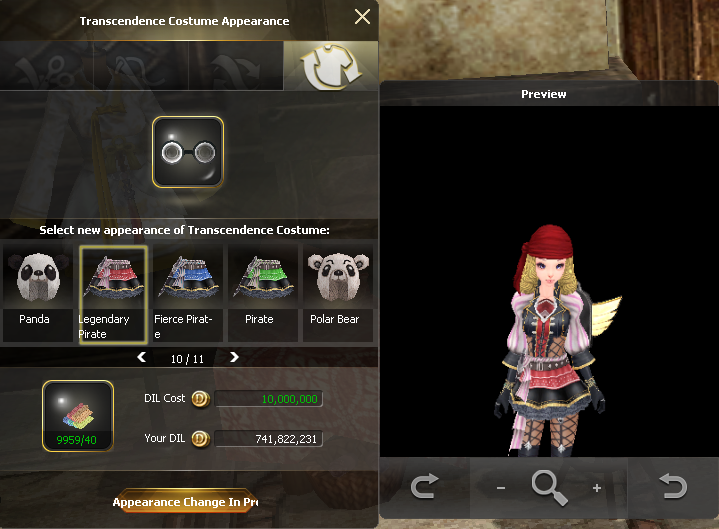 Being a pirate is not free. I don't know where you heard otherwise.

And that’s not all. Each Transcendence Costume is created with two random Rank Options, which grant even more stat bonuses. And if you’re not pleased with the options you receive, for an additional Mystical Fabric fee you can re-roll them as many times as you want. 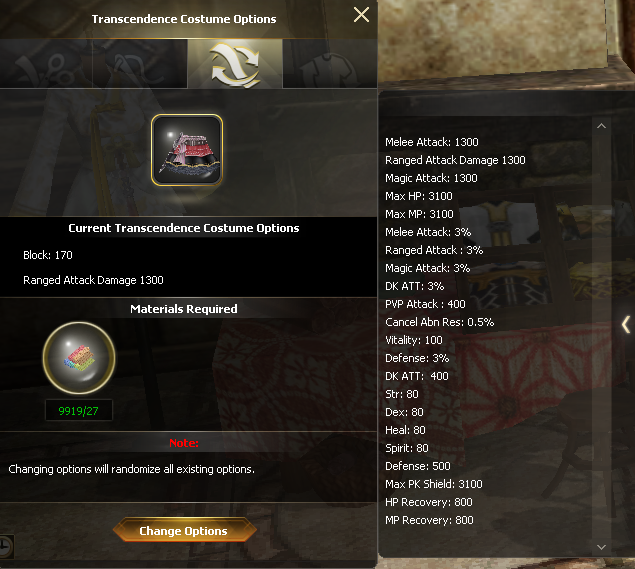 Now get out there and turn some heads.

If Viola is the New Hotness, someone else must inevitably become Old and Busted. And as it turns out, one our friend Wingo’s many enterprises is a clothing store. At least it was, because Viola’s arrival has run him out of business. 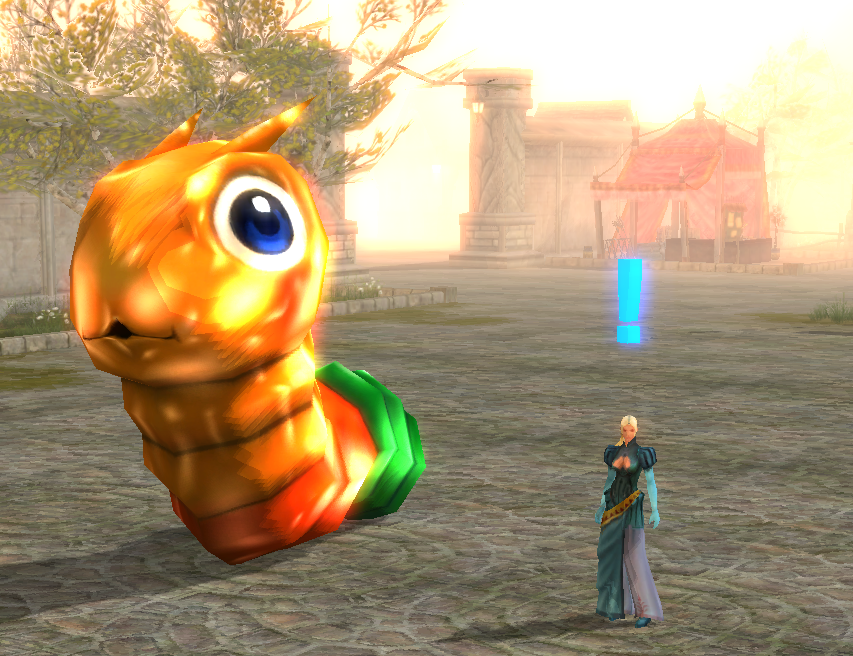 You know what I blame this on the downfall of? Society.

So Wingo is throwing a close-out sale, and liquidating whatever he can from his old stock of crests, accessories, and other miscellany (you end up with strange things when you buy wholesale). But rather than taking cash, Wingo only accepts payment in the form of the Clothing Sale Flyers that he’s stuffed into every mailbox in Ardeca.

You’ll receive one flyer per day in the mail if you’ve logged in with a character of level 150 or higher, and the flyer will be sent to the highest-level character on your account.

The stock from Wingo’s now-defunct store includes various Costume Crests (coloured below accordingly), a 1-day Great Devil’s Horn, and the Halloween Staff which does literally nothing at all except look interesting. Enjoy it. 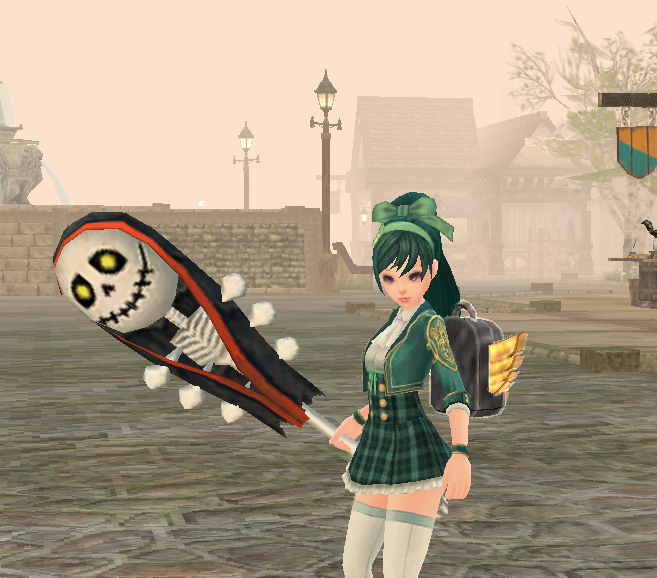 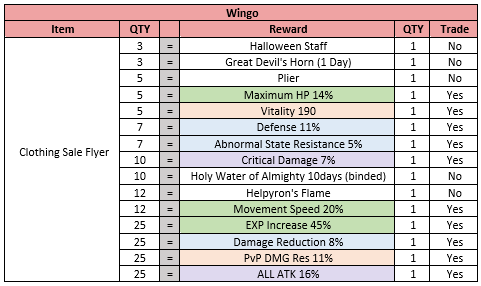 A wide new variety of New Type Costumes are now available under the DShop’s Costume tab. With our fashion-minded update, we've decided to extend the sale of the New Type Costume Jackpot Box by two more weeks.

The Champion’s Lucky Box is making a brief return, and the Experienced Foxy Box will help make sure that leveling doesn’t take up all your sweet time (and will give it right back to you one of these days). Trieste’s Gold Treasure Box has some new wings and wing jewels, for when you’re walking through the clouds (with a circus mind that's running wild). 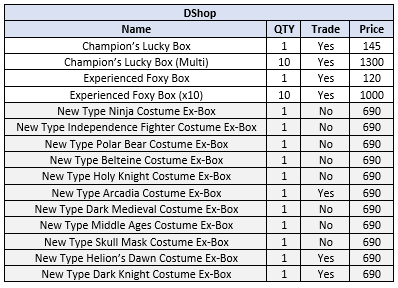 All eleven of the new costumes can be found under the Misc -> Costumes tab, and will remain available for purchase for the foreseeable future. All New Type costumes allow you to have Blacksmith NPC’s insert costume crests into them, for additional stat boosts. 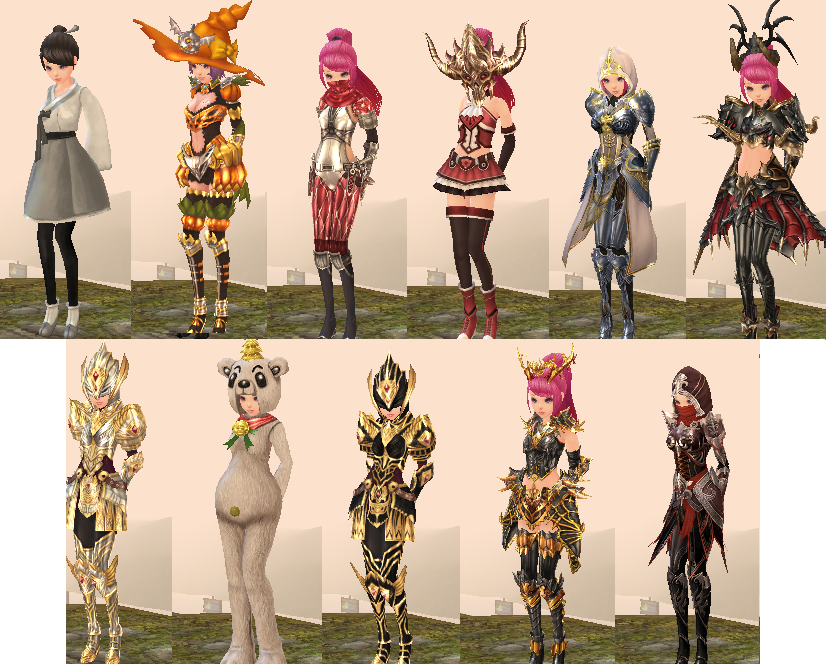 The Champion’s Lucky Box is here to help if those Colosseum bracelets remain out of your grasp. The Blood Circulation Jade Bracelet, obtained in Norak Secret Arena, can be upgraded to various stages of power. But to do so, you’ll need Champion’s Tokens and Fight Tickets, normally obtainable only in the level 195+ Colosseum Arena solo dungeon. Why not give yourself a break from the grind?

Are you experienced? If you haven’t gotten your mind together, the Experienced Foxy Box grants various quantities of Experience Scrolls, which grant you the indicated bonus to experience point gain from killing monsters, for 30 minutes each. Excuse me while I kiss the sky. 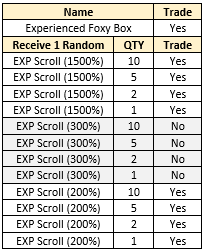 Trieste’s Gold Treasure Box is taking wing, with three new pairs of wings available in addition to the two that could already be inside. You also have a chance at the New Wings Socket Stone Lucky Box, and one of the contained wing socket stones. 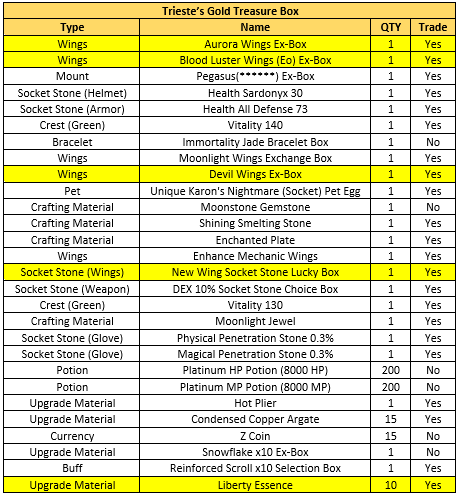 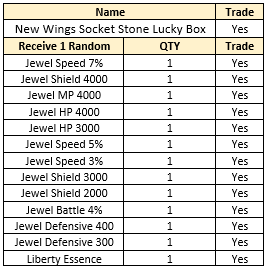 Players can now enter the Secret Passageway in Python Castle again, if they left before completing the quest.

The Equipment Preview Window should no longer be hidden away in the corner of your screen.

Temporary bans have been issued to multiple accounts, all of which were confirmed to be abusing an exploit which allowed characters to repeatedly engage in daily-limited tasks.

Because some of the infractions involved the acquisition of tradable items, we will have to keep some accounts banned while we investigate where the items ended up, in order to ascertain and undo the effects of any wrongdoing.

The final length of the bans will determined by the degree of the infractions, as well as other account information such as existing warnings or bans.

The exploit arose due to a server-side issue, but it is still considered exploitation to abuse game issues that arise in this manner. We expect that players are capable of using common sense to determine whether or not an action is exploitative when it produces unusually high returns. The large number of players who reported this issue as soon as they recognized it confirms that this particular issue was easily recognized as an exploit. Our sincere thanks go out to these honest players.