Aria just can’t seem to get enough of seeing happy customers walking away with their successfully-upgraded Mitera’s Bright Tears. So not only has the event returned, but she’s including several more accessories and emblems in the mix.

And as long as accessories are on your mind, you’ll have a better chance at finding the Dragon Horn, the traditional bottleneck to crafting the Dragonic Perpetuus.

Multiple game enhancements have been added to the client, too. 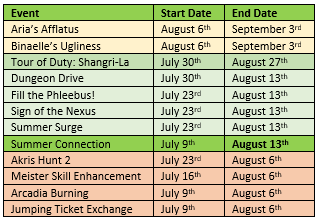 You’d think that Aria had a sadistic streak, from the woes of customers who just can’t reach that final Devil’s Horn stage, or are ready to flip her workbench for lack of those Full Moon Star Earrings.

Perhaps she’s already been doing the best she can but has found a way to give even more of herself. Or maybe your pleas have rent a minuscule fissure in her dead black heart. Either way, you’ll see increased success rates and/or material discounts during this event, for the following accessory and emblem upgrades: 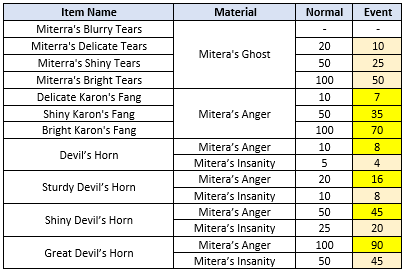 Do remember that the success rates for some of the more powerful upgrades are so small, that even doubling or triple the success chance still means they will likely take at least a few attempts.

The Dragonic Perpetuus is one valuable accessory that you don’t need to consult Aria for, but it seems that her auspicious aura has enveloped it as well.

When challenging Sacred Claw, the Dragon Horn will drop from Inner Ugliness twice as often as usual. For the uninformed, you can challenge Inner Ugliness by using Dream Powder after defeating Binaelle Fairie. 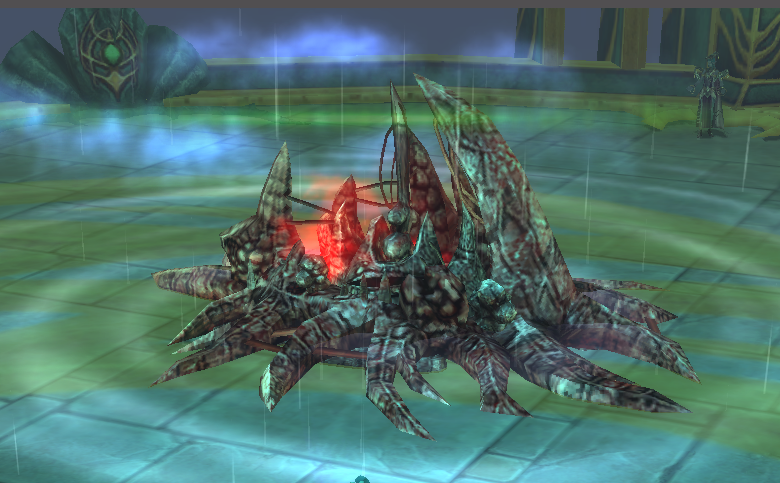 Your chances at finding the most elusive piece of the Perpetuus are even better than double during this event, because Conjuror Edward and Lab Chief Verdia have a very small chance of dropping the Dragon Horn, too.

It’s the third and final week of our experience event, and both servers can look forward to 600% bonus experience for the entire week.

Pretty much everywhere, it's gonna be hot. You won't need a jacket.

The Nexus Lucky Box sale has passed, but the 30x pack offer for Trieste’s Golden Keys will be extended for one more week.

If you feel that dire need for those Colosseum bracelets, but can’t tolerate any more Colosseum Arena matches, the Champion’s Lucky Box is ready to tag in for you. Even if you don’t pull out an actual bracelet (the rare top prize), you can find a few Fight Tickets or Champion’s Tokens to contribute to the cause. And while Fight Tickets are normally binded, you can freely trade this pack of five, until the box that contains them is opened.

The multi-pack is like paying for nine, and getting the tenth for free. 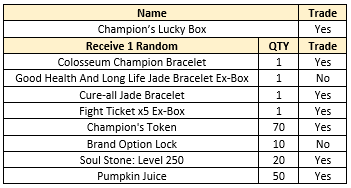 A few enhancements have been added to heighten your gameplay experience:

Light Bloom intensity can now be adjusted under the Graphics game options tab.

The map list under Party Matching is now presented in a more level-appropriate order.

An option to disable the display of Smart Warp has been included in the Graphics tab of game options, but is not yet enabled.

Summoners should no longer be able to use Chakra skills to flag players in Battle Support mode as Niete without provocation.

Orpheus no longer mentions upgrading the S2 Primus Anno Novus Ring via Seed of Dreams, since this is not an option.

Marielle’s dialogue for trading Circulation Argates now correctly specifies the types of Argates in the exchange.

Costume Crests from the Fill the Phleebus event can now be added to costumes.