With our anniversary celebration going nicely and lasting another week, this week's update is relatively minor. Still, there's a new event and a couple of new DShop offers, and we hope something will pique your interest.

​You’ve no doubt run past Parakel, the Black Handed Alchemist many times, but  it’s likely been ages since you’ve made use of his wing crafting services. 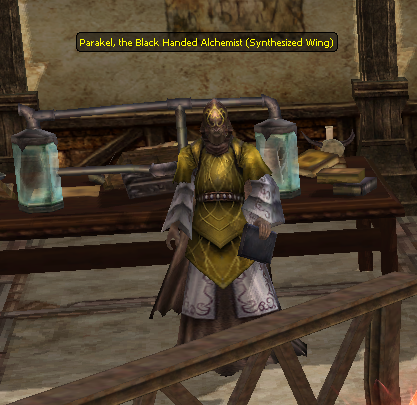 Don't mind me, all I gave you was the gift of flight

But Parakel has issued a summons to anyone who will assist him. It seems he’s developed an interest in Akris, those glowing beasts which congregate in the spaces between combat zones. 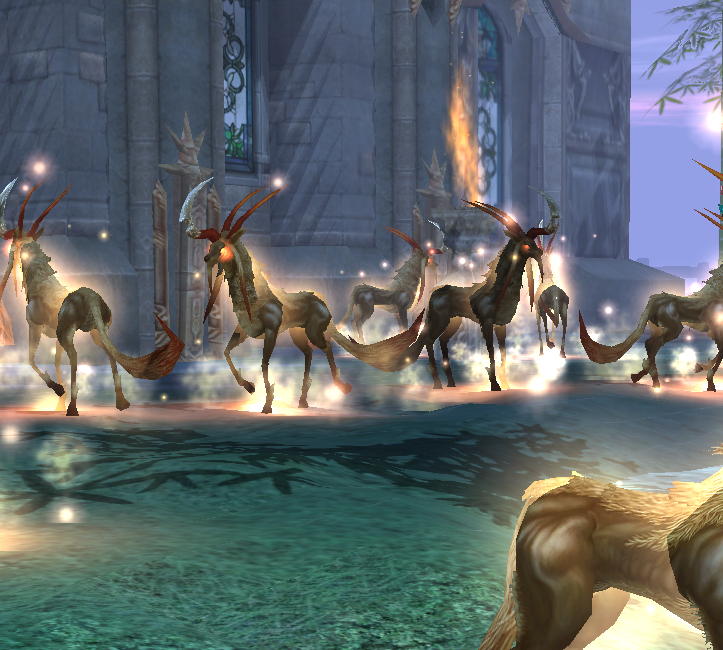 Get off my lawn!

If you happen to come across an Intact Akris Hoof, Parakel is willing to trade it for enough Crest’s Powder to make one attempt at Carmen’s Crest Machine, just around the corner.

Of course, Carmen’s crests aren’t anything special, and Akris aren’t the tempting targets that they used to be. Nonetheless, we can’t help but wonder what Parakel is up to.

Parakel will be giving out Crests’s Powder until July 16th, and all existing Intact Akris Hoof will be removed July 30th.

​We’re turning the EXP dial up to 300% for both servers, for two days. This is just a standard weekend boost event. It doesn’t have a fancy name. Enjoy!

​The Dekaron Fisherman is booked for another week in Trieste, but player feedback has been that the items he requires aren’t common enough even for full-timer fishers to complete his tasks. So we’ve roughly tripled the rate at which Piranha's Bone, Hungry Piranha, and Trace of Dekaron Fisherman appear, and hopefully all our dedicated players will be able to make the most of the Dekaron Fisherman while he's still around.

Cut down the mightiest tree with a herring! Also, catch a herring.

Those lucky few of you who possess the precious and elusive Moon Light Qune’s Earring can now check "Unique Accessory Upgrade" in your crafting menu, where you'll find a recipe to re-roll the values of your earring's Rank Options. It’s not cheap, but if the numbers on your earring aren’t up to your standards, you can try for better ones. 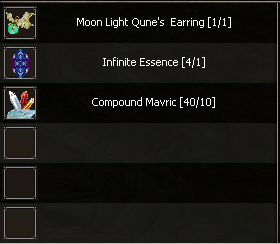 Three new DShop offerings are on the shelf this week.

The Zuto’s Glory Random Box contains one of a variety of popular items. Try your luck with one, or get a discount on ten.

Kakao is used for the final upgrade stages of the Deka Line Ring, but the player community has largely moved beyond its traditional sources, making it extremely rare. If you’re set on that Transcendental Deka Line Ring, the Kakao 100EA Ex-Box can help with the final push.

Each of the Disaster/Elemental Stone Selection Boxes found in the Bracelet/Belt Socket Stone Fortune Box contains your choice of one of three belt/bracelet stones (curse/poison/dark for Disaster, lightning/fire/ice for Elemental) of a level corresponding to the box’s number. Box and contents are all tradable, too. 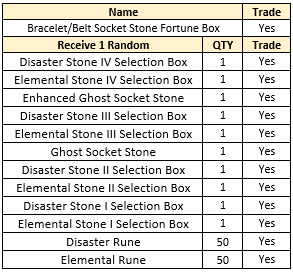 The Disaster and Elemental Runes are consumed when triggered, but grant a 5-minute damage and resistance buff to their corresponding elements, in addition to the usual bonus experience (more than 28 million per rune, not affected by EXP multipliers).

All of these offers will be available until at least July 16th.

The first Siege on Helion was a success! A success means that the server did not crash. But there were some issues that prevented players in registered guilds from accessing the battle right away, so the results could only generously be called a “battle.”

Nevertheless, we’re pleased at the interest that the event generated, and now that we’ve seen which parts of the Siege system are operating, we can focus on the ones that aren’t. Restoring the functionality and fun of Siege remains a top priority, and we’re thankful to those players who showed up and helped us determine what needs to be fixed.

For your reference, here are the current Siege time settings. All times are in CET (UTC +1).

These settings will likely change once we have the bugs ironed out.